Normally an even numbered year would see the English footballers featuring fairly prominently in the SPOTY betting markets. The last couple of years though has seen a long overdue sense of realism take over about the prospects of the home grown players.

So, at the start of the year, it was left to last year’s landslide winner Andy Murray to head the market at about 5.0. Chris Froome, the impressive 2013 Tour De France winner, was second favourite. Other than that though, the markets suggested that people could not really think of anyone else. And the market leaders would always be vulnerable once the year got underway and British sportspeople started putting top performances in the book.

Lizzy Yarnold was first up in February, winning gold in Russia. She traded as short as 4.2 on Betfair.

She was then followed by ..  well we’re still waiting really. But that’s not to say there hasn’t been plenty of activity in the SPOTY markets..

Mo Farah was originally priced up as the favourite for the London marathon in places before the market corrected. Mo eventually finished in 8th and any prospect of him being SPOTY appeared to vanish.

Last weekend Ronnie O’Sullivan gave up a healthy lead in the world snooker final to foil another SPOTY gamble (traded as big as 500 into 8.4 on Betfair).

By far the biggest story of this SPOTY year so far though has been Steven Gerrard. He was heavily backed into as short as 1.74 (from a high of 150) on the back of Liverpool’s ten game winning streak that took them to within touching distance of their first English title since 1990. The dream now appears to be over and Gerrard has drifted off again as quickly as he came. 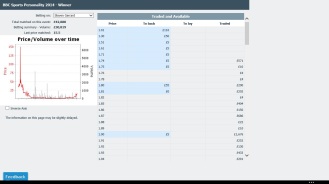 The consistent Lewis Hamilton is the solid favourite having got off to a very good start in his shiny fast new F1 car.

The above illustrates just how so much can happen, yet nothing much at all. And how, to my mind, it is one of the most interesting betting markets, providing entertainment and many varied trading opportunities.

Here I aim to dissect and report on the market throughout the year, as well as the different sports and events that shape it. At the same time building up a profitable portfolio trading in the SPOTY market itself and in the sports markets involving the (perceived) potential protagonists.

My Tweets
Join 655 other subscribers
Follow spotybet on WordPress.com