There’s not been much to report SPOTY-wise recently – barring a big surprise it’s all but over with Rory McIlroy 1.12 on Betfair and a best-priced 1/8 with the bookies. Hype around the night has been at a minimum – just as well many will say!

There are still plenty of markets to play in though with the Without-McIlroy market, the top 3 market etc. By the time of the night on Sunday 14 December 2014 there will be markets for each of the ten finishing positions.

Before then though I think there is a good opportunity to enter the Without-McIlroy market: 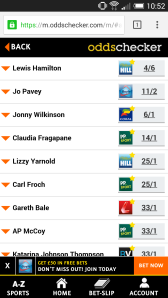 The shortlist of ten is selected by a panel and announced on BBC One’s The One Show on Monday 24 November 2014 – full details here.

Will Bale be on the list? You’ve got to think he must be – a) he would be the only footballer on the list b) he scored in, and won, the European Cup Final c) he’s the only British footballer on the shortlist for the Ballon d’Or d) he’s still the world’s most expensive footballer e) Wales have a chance of being top of their qualifying group for the European Championships on SPOTY night and, in any event, have a good chance of qualifying.

Assuming Bale makes the shortlist then what are his chances of getting votes? I think they are pretty good.

Carl Froch – There was a lot of publicity surrounding his fight with George Groves. That was back in February and I am not sure he has really captured the imagination of the wider public.

Lizzy Yarnold, Claudia Fragapane, and Jo Pavey – There appears to be a groundswell of support for women to be further represented in SPOTY and it could be that these women get a fair amount of publicity – in particular, Pavey who impressively won the European 10,000m gold at 40. How much this will transfer to votes is the question. I have my doubts about this mainly based on how much their actual performances were recognised by the wider public. On balance, I am not convinced many people will actually remember them and vote for them. Based on that I think they are short in the market.

Jonny Wilkinson – I can see how there could be a Ryan Giggs-2009 element to Wilkinson’s popularity this year, plus he won the European Cup in his last game. That said, he has already won the SPOTY award in 2003 and, while he remains extremely popular, his actual achievements this year are no better than Bale’s. The emotional vote could kick in but when there is such a short-priced favourite, such as McIlroy, my intuition is that this will dampen such a vote – people may think, ‘what’s the point?’.

Lewis Hamilton – He’s the obvious obstacle at 4/6. I wouldn’t bet on it though, as while he is the likeliest runner-up, I remain sceptical as to his wider appeal and that of F1 these days. A terrific driver, he failed to win SPOTY in 2008 despite winning the championship and being the heavy favourite. He also has to win the F1 title this year which is no formality, although he is 1/3 to do so, and with double points available on the last race of the season anything can happen. Again, as with everyone, there could be a dampening effect on votes for Hamilton due to McIlroy appearing such a certainty.

So with Bale at 33/1 I think this is a terrific bet. He has produced some memorable performances for club and country this year, is a likeable lad and instantly recognisable to a large proportion of the population. But most importantly he is Welsh. The Welsh have consistently got behind their own in large numbers with Joe Calzaghe, Giggs and Leigh Halfpenny (2nd last year to Andy Murray) recently benefitting.

I can see Bale being nominated for the shortlist and his odds trading much, much shorter on the night than the current 33/1. While he may not finish runner-up we can trade out for a good profit.

A real shake up in the market with Andy Murray and Chris Froome going out in spectacular fashion just as their odds were significantly contracting. It really does seem the award that no-one wants to win.

This has led to Jonny Wilkinson and Carl Frock being well backed.

We covered ourselves on Murray and Froome by laying them for their respective events to come out of it all unscathed. We have Gareth Bale and Mo Farah running for us and their prices have naturally come in a bit.

Wilkinson is the really interesting one and we will have to keep an eye on him. For now we will keep a watching brief but there is still all to play for in this market with Lewis Hamilton still at the head of affairs after a successful British GP.

It’s been an quite an interesting couple of weeks with some springers in the market.

Jonny Wilkinson retired. He’s had a fantastic career and is a very honourable and admirable individual. An old-fashioned sportsman in many respects. I’d imagine the market is thinking along the lines of Ryan Giggs winning the award back in 2009. I think, though, it’s safe to rule him out of the reckoning – by December I can’t imagine many remembering him bowing out.

Gareth Bale won the European Cup, or Champions League as the kids like to call it these days. He also had an instrumental part to play, scoring the crucial goal in extra time of the final to put Real Madrid 2-1 up. He’s a genuinely wonderful and captivating footballer.

As it stands, Bale, Froch and Lizzy Yarnold, are essentially (bar Rory McIlroy winning the BMW) the only contenders in the list below to have won anything of real note so far. Bale is widely available at 20/1.

I am struggling to ignore this price I have to say. There are many reasons why I think it is a decent each way bet. First and foremost he has been at the forefront of Real Madrid winning one of the biggest prizes in football.

It is entirely feasible that during the next few months no British sportsperson wins much. Andy Murray could easily, indeed is likely to, come away empty handed this season. Lewis Hamilton may not win the F1 title (although is quite likely too, however, as I will mention in another post at some point, I am not convinced one can be too confident about him having a SPOTY winning profile). And it would be surprising if England did anything at the World Cup. Chris Froome must have a very good chance of winning the Tour for a second successive year (is odds-on now) and Mo Farah should win gold at the Commonwealth Games at the end of July. There is of course room for a left field contender. I can’t see cricket capturing the imagination too much this summer though but possibly it could come from the Ryder Cup or Commonwealth Games.

By December there could easily be no stand out performer, at which point Bale’s credentials will seem attractive. Even at this stage it seems he will be shortlisted (usually 10 are on the shortlist). The Welsh will not be afraid to vote for him either as they have proved time and again with their sons. Steven Gerrard in 2005 had a fairly similar profile and came third. That was the year Liverpool won the European Cup. Gerrard also got bronze in that year’s Ballon d’Or in the weeks before SPOTY.

Please, as always, feel free to comment and discuss anything I have posted and the latest in the SPOTY markets.