With three days to go the Betfair markets are becoming more liquid and firming up. There hasn’t been too much by way of polls to refer to this year but there are a couple of potential indicators that I’ve noticed.

The Guardian poll has probably been the most high profile but I could not see how many voted in it. It was open for a good few days so probably a fair number. This shows Lewis Hamilton with  42%, Rory McIlroy with 34% and then Jo Pavey with 11%. Gareth Bale is in with the pack on 3%. There are a few other polls dotted around the internet which also show a two horse race. Most of these seem to show the F1 champ ahead. Of particular interest I thought, on the night of the shortlist being announced, was the number of ‘retweets’ and ‘favorites’ for the tweets from the BBC SPOTY for each contender as they were announced. This showed Hamilton far ahead.

There was probably a strong recency bias here in that the shortlist was announced the day after the F1 title was decided. The question is how much will this bias wear off, if at all. Rory has slowly drifted out to around 1.6 and is now back in again at about 1.53 but support for Hamilton is very strong (3.1) and this is supported by polls. There may also be a YouGov poll to come at the weekend which I will update on.

I’m probably happy enough to leave my current position at the moment, until any further information comes to light. 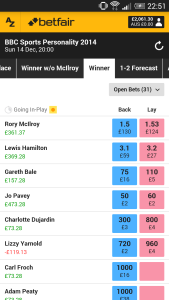 Back on 29 June 2014 I advised a 3 points each-way bet on Gareth Bale at 33/1, a fifth of the odds for top 3.  Effectively (assuming he doesn’t win and we lose that part of the stake) if he placed it would lead to a 16.8 points profit. There has been plenty of trading opportunity since the shortlist was announced and I have been slowly laying Bale at around 2.66 to green up my book. I was banking on the Welsh vote but there has been a general lack of support for Bale in social media and perhaps tellingly in Wales’s own SPOTY awards he did not even make the top 3.

A real danger I think is Jo Pavey who I have been slowly backing  to even up the green top 3 book. She is currently a best priced 13/10 top 3. I’ve noticed quite some support on social media for her and in the polls. Athletes have a fantastic record in SPOTY too. I’ll most likely be advising a play on Pavey before the show, possibly to finish third, depending on prices, to balance our book for what should be a profit. Two sound judges, Ralph Ellis and Joe Dyer at betting.betfair.com make a good case for her here and here.

Incidentally a word on my staking for my last selection which was Bale in the without McIlroy market – 8 points at 33/1. On reflection I should have advised a smaller stake of one or two points for such a big price for practical reasons of getting on. There has been plenty of opportunity to trade out for a profit on this selection though – has been around the 17 mark on Betfair for a week or so but I will likely make an official selection to balance the books on this bet. As we approach Sunday I’ll be providing further news and updates and will let you know of any selections. It looks like Pavey is the one to watch.